When J.T. Taylor first entered Sherri Pool’s fourth grade classroom at Apollo Elementary in 1995, he was just nine-years-old and struggling to make sense of reading and writing.  J.T. had both dyslexia and dysgraphia, learning differences that, at the time, few educators knew much about. Yet Pool did not let that stop her from helping him, nurturing him, encouraging him — something that did not go unnoticed by his mother.

Like her son, Denise Bankston also formed a special bond with Pool, who taught and tutored J.T. for years.  Bankston vowed to one day re-pay Pool in some way. She’s doing that now.

Bankston formed the non-profit, “A Kids’ Choice Foundation,” and since July 2010 has given $67,000 to Curtis Elementary where Pool is now principal. She has also paid for eight Bossier Parish teachers to attend Landmark School outside of Boston, Massachusetts, for a week last summer. The world-renowned school specializes in teaching children with dyslexia and other learning differences and is where J.T. eventually attended and had his breakthrough. Still, Bankston is ever grateful to Pool.

“Dee Dee!” the students yelled as Bankston entered their classroom on the last day of school before the Christmas break. She was dressed in black but could easily be considered Santa Claus, for she came bearing gifts. Her son, J.T. and family were at her side. They passed out necklaces inscribed with the words “Wish. Believe. Dream. Receive.” All 450 students received one, as well as faculty and staff. But that’s not all, she told the kids. Bankston explained that each necklace is symbolic of 25 cups of food that a needy child elsewhere in the world will receive through the Greater Good Network.

Pool beamed as she watched her friend hug each child. The principal pointed out to the students working on laptops that Bankston was the woman responsible for buying them, as well as the Active Boards in their classrooms.

J.T. is pretty proud of his mom, too. “I love it. It’s a great honor that my mom is able to do these things for all these kids,” he said. He’s also pretty proud of his ‘second’ mom, Sherri Pool. “She’s been like a second mother. There’s a lot of love between me and her.” J.T. went on to say, “She’s been with me since fourth grade. She surprised me at my high school graduation and college graduation.” 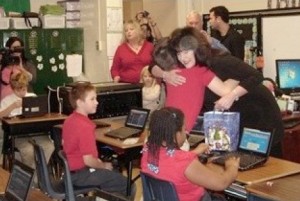 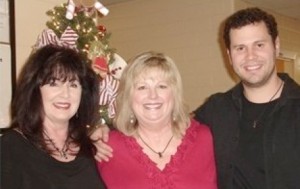 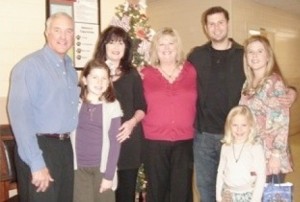