Legacy Returns to a Big Surprise 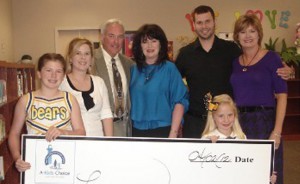 Students at Legacy Elementary knew something big was going to happen when they returned from Spring Break and were called to an assembly.

There were plenty of important people there; the Superintendent, school board members, principals from other schools, Rick Rowe from KTBS. But it was the woman sitting on the right side of the stage, flanked by her family, that was the real guest of honor.

Denise Bankston, founder of A-Kids’-Choice Foundation, came bearing gifts, and anyone familiar with “Mrs. Dee Dee” knows she is a woman whose life revolves around giving back.

“Do you struggle with learning?” Bankston asked the students. A few hands went up. “Do you think you learn differently than your classmates?” More hands. Bankston then told the story of her son, J.T., who struggled with dyslexia. It was his ninth grade year that she and her son moved to Boston, Massachusetts, so he could attend The Landmark School, known worldwide for helping children with learning differences. At long last, all the pieces of the puzzle came together for J.T. He learned how to express his thoughts in writing and understand what he was reading. He not only graduated from high school but went on to college and earned a degree.

“I never gave up,” J.T. told the student body. “Be an advocate for yourself. If you don’t understand your homework, speak up. Tell your teacher.”

Thanks to his mother’s foundation, three teachers at Legacy joined five others for a workshop last summer at The Landmark School, so they could better help students with learning differences. They have already seen remarkable progress in those students. This summer, A-Kids’-Choice Foundation is sending eight more.

But that wasn’t the surprise on this particular morning. Denise Bankston announced she was adopting Legacy and every child there was getting a special necklace, inscribed with the words “Faith. Hope. Love.” The necklaces, she told them, are symbolic of more than 24,000 cups of food for hungry children across the nation.

She then asked her granddaughters, Abbie and Emma, to help her present another gift — a $10,000 check made out to the school. Principal Pam Williamson hinted that the money may go toward supplementing the phonics program and perhaps professional development for her teachers. That way every child can benefit.

Yes, you do, Mrs. Bankston and so does A-Kids’-Choice Foundation.